A soldier of the Nigerian army has reportedly taken his life in Bauchi.

The soldier, a new recruit is one of those that was recently posted to the army’s school of armour in Bauchi.

According to soldiers who were with him at the time of the incident, the deceased was having a conversation with others when he suddenly pulled out a gun and shot himself in the stomach. 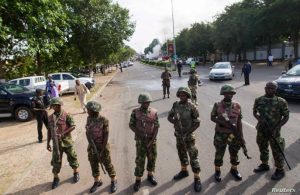 His colleagues were unable to rush him to the hospital as he died on the spot.

The Nigerian soldier’s body has been deposited at Abubakar Tafawa Balewa Teaching Hospital in Bauchi.

Other soldiers who were with him have been locked in a guardroom pending the time investigation is carried out.

The incident has been reported to the Army headquarters and a board will be set up to interrogate.

This isn’t the first time that a soldier has taken his own life. A soldier committed suicide after killing a captain in 2017 in Chibok.

Another soldier who was sent to battle Boko Haram in 2020 killed himself and left a note to his wife.