-Two members of the Western Nigerian Security Network, Amotekun were also injured in the battle

-The cause of the fight is yet to be determined

Two residents of Oyo state have lost their lives after a battle that ensued between Fulani and Yoruba in the state.

The fight also resulted in injuries for two operatives of the Western Nigeria Security Network, Amotekun, and a vigilante. 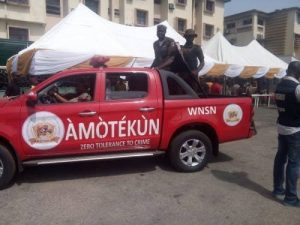 Although no official source has given a reason for the fight, reports say that a Fulani man attacked 3 Amotekun Operatives with a Cutlass when they tried to separate a fight.

Two Amotekun operatives had to be rushed to the hospital along with a vigilante after being inflated with injuries.

The names of the injured Amotekun Operatives are Michael Oguntade and Yekini Tijani.

The incident was confirmed by the Commandant of Amotekun Corps in Oyo State, Col. Olayinka Olayanju (retd).

The commandant claims that the injured operatives are still receiving treatment in the hospital. He also confirmed that the Police recovered two corpses from the scene but didn’t reveal those who were killed.