-A Nigerian witness, Ngozika Ihuoma has revealed that N1.63 trillion was looted by the Economic and Financial Crimes Commission (EFCC)

-The witness stated that the incident happened under the administration of the former chairman of the organization, Ibrahim Magu

-This statement was made on Thursday, to a Federal High Court in Abuja by Mr. Ihuoma

The Economic and Financial Crimes Commission (EFCC) has been accused of diverting 222 assets worth N1.63 trillion under former chairman, Ibrahim Magu. 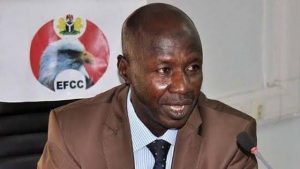 A witness, Ngozika Ihuoma revealed this to a Federal High Court in Abuja on Thursday.

Mr. Ihuoma stated that the asset was recovered by Pension Reform Taskforce Team which is now defunct.

The witness made this statement while acting as the defense witness in a trial against former PRTT chairman, Abdulrasheed Maina.

Mr. Ihuoma who was a management consultant told the court that Mr. Magu admitted to distributing the properties after presidential directives.

The witness told the court that his consultancy firm, Crincad & Cari Nigeria Limited was hired by PRTT.

He added that the property was still subject to litigation and insists that the EFCC should give an account of the recovered assets.

5 Weird Things We Did As Kids In Nigeria