The cute moment between a mother and her child most likely cannot be compared with anything in the world. Mavin first lady, Tiwa Savage, who is currently in Ghana for an event was moved to tears after her 2-year-old son Jamil, tried singing her song. She shared a video of her son attempting to sing along her latest tune, ‘All Over’ on her Instagram and captioned it ‘Live Performance.’ Tiwa Savage moved to tears as her son sings ‘All Over’. 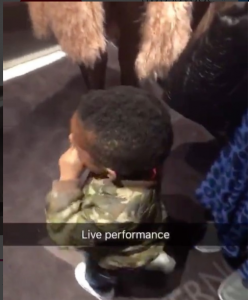 On her Instagram page @tiwasavage, the mother of one wrote: “So one day I was singing my song and out of nowhere my son started singing along. I was so shocked and emotional and happy and teary. My tiny baby of just yesterday is growing so fast. Every development I witness is like a miracle just like when he started walking or when he started school. Didn’t even mean to write this much but my little man is everything to me. I love him sooooo much, my lil jam jam. Na because of you wey I get goosebumps ….
My baby is quite shy as well. Video courtesy of @Anita_head.”

Tiwa Savage moved to tears as her son sings ‘All Over’

This is really so amazing. Meanwhile, as haters continue to see fault in her dressing, the beautiful singer is soaring deeper into her music career. Soon after she released the video for ‘All Over’ song, critics dragged her to the mud over her dressing. Fans called her out for her revealing photos which they tagged ‘nude’, asking her to leave such lifestyles and appearances for the younger generation.

She came under attack for baring her cleavage in the Patrick Ellis masterminded video. In the video, she put her sexy body on display in her danshiki swimsuit. Some of her fans found the video offensive and inappropriate. Following her marriage crisis, the Afro-pop diva isn’t allowing the aftermath to cramp her shine, also, she kept mum despite the comments about her dressing. That’s the way to go girl…

You may also like All Over – Tiwa Savage @tiwasavage (Video)