Work of fiction! We bring you another #inmyhead purported interview between popular R & B singer, Banky W and the NET where he ‘spoke’ with a correspondent. In the interviewer’s head, Banky W reveals how he has a feeling that renowned actress, Patience Ozokwor will ruin his marriage to Adesua Etomi. Patience Ozokwor wants to ruin my marriage to Adesua Etomi – Banky W. 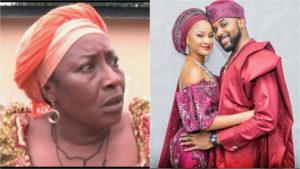 Recall that Banky and Etomi, in reality are engaged to be married but they are a couple in the popular movie, ‘The Wedding Party‘. Ms. Ozokwor has become a part of ‘The Wedding Party 2’ and many people cannot wait to see the film after she was added to the lineup of cast. The team are currently in Dubai shooting the film. Photos and videos of them in the United Arab Emirates capital have been showing up on social media in recent times.

I (The NET interviewer) put a call through to Banky W. And as I feared, wahala is already happening.

ME: Mister Capable. How far? This is ‘Segun Odejimi. I know you don’t have my number.

BANKY W: Yeah. Been asking around for it. I read the interview you did with Susu. She told me about it and I was initially skeptical but it turned out great. Thank you bro.

ME: Don’t mention. I live for you guys.

See also FICTION: 2baba not my suitor but he is the kind of people I now roll with – Tboss

BANKY W: Wow! That’s cool of you to say. Susu and I will ensure you get a seat in front at our wedding. 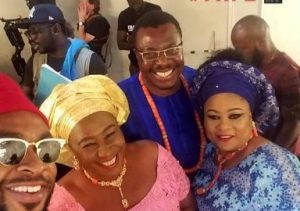 ME: You don’t have to do that. I don’t like being in public eye. But I actually wasn’t referring to just you and Adesua. I live for the whole Nollywood community.

BANKY W: I see. All the same. You have to attend our wedding. [sudden sadness in voice] That’s if it happens…

ME: Why? You’re tired of Adesua already? Or is Don Jazzy guilt tripping you for leaving the Nigerian Bachelors Society just like that?

See another work of fiction Big Brother asking Tboss out? See what she said about her breasts

BANKY W: You know she has been added by the producers of The Wedding Party 2 and she’s actually supposed to play my mother’s elder sister.

ME: Oh… She will be Ireti Doyle’s elder sister in the film?

BANKY W: Yeah. In the film, she’s supposed to try to disrupt my marriage with Adesua. She is going to try to do her best to put us asunder. You know she has played the horrible mother-in-law part in movies for long. 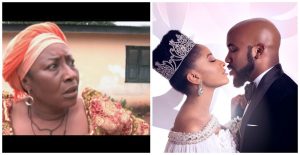 BANKY W: I mean, she’s killing the role in the film but the problem is that she seems to be taking the role really literally and bringing it into the real world. Anytime she sees Susu and I, she runs from wherever she is and comes to pull us apart as if it is a fight she is separating. The other day, Susu and I were enjoying ourselves in our hotel pool, she was supposed to be learning her lines with RMD. Immediately she saw us, she left RMD, pushed her way towards the pool screaming and pulled Adesua by her hair.

SEE: Dear Banky W and Adesua Etomi, here’s why you must beware of Patience Ozokwor

BANKY W: You remember how Adesua screamed in The Wedding Party when she noticed her wedding gown had torn?

ME: Wait! When are you guys planning the wedding to be?

BANKY W: No, I’m not telling you yet.

ME: And you don’t want to tell the world?

BANKY W: Not yet.

BANKY W: Don’t mind Ebuka. He was the one I asked to put the flowers and candles in the room in preparation for the proposal. He’s the one who made the mistake.

ME: So Ebuka does not know how to spell? 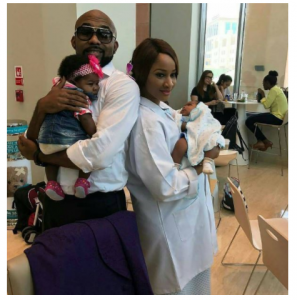 BANKY W: Of course, he does. But y’know, sometimes, these things happen.

ME: Of course, they do. Is Don Jazzy officially the new head of that you people’s Nigerian bachelors society to which you used to belong?

ME: For who? Linda Ikeji finally stole his heart?

BANKY W: Not her.

BANKY W: Not her.

I’m sure you noticed the ‘fiction’ in this report? If you think this interview took place, President Muhammadu Buhari has finally handed over to his vice, Yemi Osinbajo. Inshort, Buhari has resigned. Damn, all these things only happening ‘IN MY HEAD’. 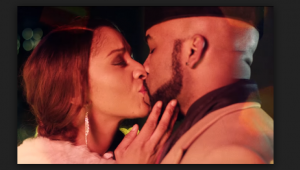 Haha, now, this is just for laughs. Hope you had a good read and smiled all through. Anyway, Ozokwor in real life is now born again and is far from what she was portrayed as here.

See Chris Morgan's Only Goal As He Turns A Year Older