-One of the former aides to Goodluck Johnathan, Doyin Okupe has revealed his intentions to become Nigeria’s President

The former media aide to Goodluck Jonathan, Doyin Okupe has revealed plans to run for the 2023 presidential elections.

The politician made this announcement on his social media accounts on Friday, February 26.

Okupe revealed that certain conditions will have to be in place for him to go ahead with his intentions. 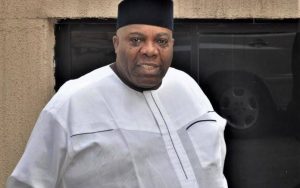 Firstly, he’ll go ahead to contest if banditry and kidnapping remain prevalent in many parts of Nigeria.

He’ll also not back down if Herdsmen attack continues in the southwest unattended to.

He also explained that his experience, exposure, and intellect will come in handy to lead the country out of its current predicament.

Doyin Okupe had recently expressed concerns about the division in the country. He asked the country to be wary as it can lead to a breakup.