A Canadian Politician was the victim of an unfortunate event that revealed his nakedness in a Zoom meeting video call.

William Amos of the Quebec district of Pontiac released a statement to apologize to his colleagues after he appeared naked in a video call.

Amos revealed that his camera was accidentally turned on while he was changing into his work clothes during a zoom meeting.

A screenshot that found its way to the internet showed the politician showed Amos covering his private parts with a phone.

The politician has disclosed how he was embarrassed at the incident and he called it an “honest mistake”.

Read also: How Manchester United’s Legend Ryan Giggs and 10 Other Footballers Had Sex With His Brother’s wife

Following the incident, Claude DeBellefeuille, a member of Canada’s Bloc Québécois party has suggested it important to remind male conference members to attend the meeting in a suit and tie. 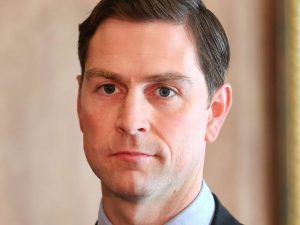 DeBellefeuille also urged her male colleagues to be careful with the camera during video calls.