Eedris Abdulkareem Asked for Money to Support Buhari in 2018- Keyamo

The Minister of State for Labour and Employment, Festus Keyamo (SAN) has revealed shocking things about Eedris Abdulkareem, following the release of his latest song, Jaga Jaga reloaded.

According to Keyamo, the song is an attempt by the musician and self-proclaimed activist to blackmail the government.

Keyamo revealed that Eedris who is currently against this government once begged to join their campaign team.

Keyamo posted screenshots of his conversation with Eedris where the musician was asking to be introduced to several ministers.

Keyamo revealed that Eedris came to him with campaign songs for Buhari but he was told that there was no budget for that as part of the campaign funds.

He then asked for a loan to pay his mother’s hospital bill but when Keyamo discovered that it was all a lie, he denied him the loan.

Eedris Abdulkareem eventually joined Atiku’s campaign team when he couldn’t get any money from Buhari’s team.

Some of their conversations can be seen below. 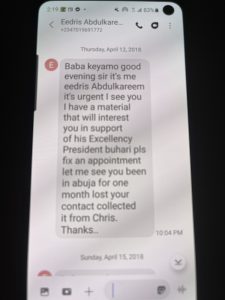 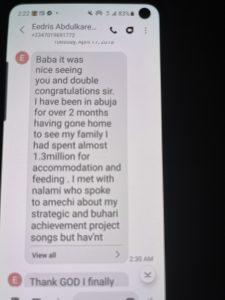